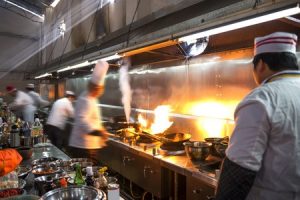 The restaurant industry is huge in the United States, ranging from fast food places to high end dining. And because this is such a big business, there is a large demand for employees in this industry. Before you apply to work at a restaurant, it’s a good idea to know what the industry is like, and what you will need to do to succeed here. Here are a few of the basics to get you started.

What is this career about?

A career in a restaurant is all about the customer experience. People come to certain restaurants for certain reasons, and the food is only one of those reasons. Finding a restaurant that is a good match for your personality and skills is a helpful way to get started. Whichever location or company you choose, the end goal is to make customers happy by delivering excellent food to them just the way that they want it. This includes friendly service and high quality dining atmospheres on all ends of the spectrum.

What growth is likely?

What growth is likely?

There are already about 10 million people working in the restaurant industry in the U.S., making it one of the larger sectors in the country. However, despite its already huge size, the Bureau of Labor Statistics does expect this industry to keep growing. Estimates go as high as 12 percent growth before the year 2024. However, certain parts of the restaurant business are expected to grow faster than others. For example, servers and food preparers, both part time and fulltime, are going to be highly sought after as this industry keeps expanding.

Many servers can expect their pay to start out at minimum wage, but the addition of tips can make this number grow quickly. At higher end restaurants, it is not uncommon to have a busy server make several hundred dollars in a night, especially if they are fast and friendly. Cooks typically begin at around $9 per hour, on average, although this can vary depending on the type of restaurant that you are employed at. As you gain experience, this rate of pay will go up. The median pay rate for this position is around $11 an hour right now, and the most experienced cooks can make more than $34,000 per year. Bartenders can expect about $9 or $10 an hour after they gain some experience, but like servers, this is a high tipping position. Skilled bartenders can make several hundred dollars in tips if they pay close attention to their customers and are fast and cheerful.

It is worth noting that some parts of the country expect larger growth than others. New York, California, Florida, and Texas have the largest number of opportunities right now, and areas like Oregon, South Carolina, and Massachusetts are right behind them. Metropolitan areas tend to have far more restaurants than smaller cities or suburban areas, too. Finding a job in a bigger city also will help with your rate of pay, especially when you start out, as more customers tends to equal a higher profit rate for the company and through individuals in the form of tips.

Success in the restaurant industry is all about providing an experience. People go to a fast food chain like McDonald’s or Wendy’s because they want their food prepared a certain way and they want it as quickly as possible. People go to a restaurant like Applebee’s or Olive Garden because they want to sit down, eat good food, and enjoy the atmosphere and ambiance of the restaurant. Being able to enhance that experience for the customer is one of the best ways to succeed in the restaurant business, regardless of what your role within the company might be. As a general rule of thumb, this means being kind, polite, hardworking, fast, and accurate. You should be able to have great people skills, get along with every customer, and take orders from management in stride.

First, you need to apply and interview, though. Many restaurants are moving toward online applications, and this does help make the process easier for job seekers. Other restaurants, especially the smaller chains or independently owned ones, prefer that you come in and get a paper application in person. This is a good opportunity for you to create a strong first impression right off the bat. Dress nicely, be polite, and show them with your attitude and appearance that you are the right person for the job. You might not even see a hiring manager at this time, but this is an easy way to potentially get the ball rolling in your favor. If you do interview, be sure that you have prepared some questions for the end of the interview. This is a good way to create the impression that you are genuinely interested in a career here.

Finally, always remember that the customer is the important part of all of this. Your goal is to make them happy, and there are times when this can be difficult. Be patient and listen, and always strive to give the customer the experience that they desire, even if it can be frustrating once in a while.

Many restaurants will hire part time servers as young as 16 years old. For many people, this is their first job and it opens up a world of future opportunities to them. If you are interested in a cooking position, you must be at least 18 years old. Bartenders are typically expected to be at least 21, although some states do let you serve alcohol at as young as 18. For management positions, it is typically preferred that applicants have a high school diploma or GED, although this may vary from company to company. This is the only position that tends to require any sort of formal education.

The people that are most highly encouraged to apply to a career in this field are those that are cheerful, love working with people, and are great multitaskers. Restaurants can be very busy places, and having a good work ethic and maintaining a positive attitude even when things are hectic is a must in this field, and friendly, hardworking, individuals are highly sought after by hiring managers.